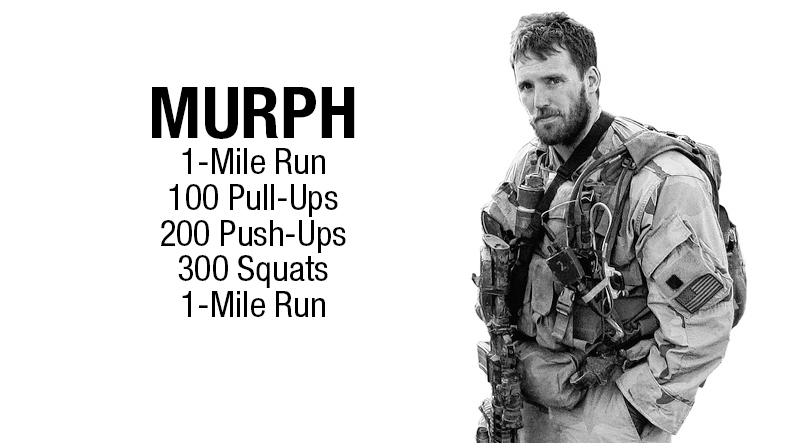 ‘MURPH’ is more than just a workout, it is a tradition that helps push us, humble us, and dedicate a bit of pain and sweat to honor a man who gave everything he had. “Murph” consists of a 1-mile run, 100 Pull-ups, 200 Push-ups, 300 Squats, and a final 1 mile run.

Michael Patrick “Murph” Murphy (May 7, 1976 – June 28, 2005) was a United States Navy SEAL officer who was awarded the U.S. military’s highest decoration, the Medal of Honor, for his actions during the War in Afghanistan. After participating in several War on Terrorism missions, he was killed on June 28, 2005, after his team was compromised and surrounded by Taliban forces near Asadabad, Afghanistan.

In the 2013 film Lone Survivor, Murphy is portrayed by actor Taylor Kitsch.

Kitsch said, “Murph’s actions speak louder than anything he’s ever said, and they should. I think he was that type of leader who just loved his guys, and getting the nod to play this guy was something special.” Prior to production of the film, Kitsch prepared for the role by performing CrossFit.

A workout named in Michael’s honor is performed at CrossFit gyms across the world on Memorial Day. The workout is named “Murph”. “Murph” consists of a 1-mile run, 100 Pull-ups, 200 Push-ups, 300 Squats, and a final 1 mile run.

Before the workout begins, participants may choose to wear a body vest. This workout was one of Murphy’s favorites and he’d named it “Body Armor”. Are YOU up for the Challenge?

This unique Memorial Day tradition will take place yearly (on the last Monday of May). We invite YOU to join countless others. Start training. Do it together, and accomplish something great!